I will from now on also write about smaller current processes and update this page more often in case something is important enough to be mentioned.

Descisions regarding the energy influx for the Earth have been made which will result in an inevitable change of power structures in the near future. These were the biggest descisions and preparations by the Lightforces so far, which will lead to compression breakthrough and the Event eventually. The cabal will be cut off the primary anomaly and other incomes they had still left, while the positive centers of the Earth will be left untouched by such energy problems and shift the still primary anomaly influenced sources relatively safe to the positive, light based energy sources.

See this article, we are making big steps forward in the processes mentioned below already.

As some big aliens in the chimera hierarchy have finally verified and aknowledged inevitable defeat themselves, heavy retaliations and reactions are expected from now on. Although many among the chimera-hierarchy knew that the Lightforces will win anyway, some of their biggest forces did not yet see nor accept their inevitable downfall. Furthermore the Lightforces hid their true progress to a degree to continue with the preparations for a smooth and stable Event. It was clear that there would come the point in time when the true progress of the Lightforces would be fully grasped by the cabal. (It might be that Cobra’s post of the ‘inflection point’ is indicating the same as this kind of turning point in the liberation was becoming more and more visible. ) Some bigger events and processes leading to compression breakthrough will become mandatory from now on. Now that the bigger aliens of the cabal are fully aware that the lightforces will disintegrate them, they therefore are expected to show broad reactions which might actually become visible on the surface.

How much can be avoided by the Lightforces will be seen - there might be no visible consequences for some time if the Lightforces are and can stay far ahead of the cabal’s measures.

A few big archons and interdimensional ETs were finally trapped, captured and departed to the Central Sun. Although it is a big relief for Earth in general nothing much will be visible as the remaining archons will still fill the 'empty space' that resulted from the departure.
Shortly before the trapping, some humans in the chimera hierarchy (secret societies, satanists, etc. ) took a big decision against the remaining innocent humanity and human/alien hostages again. Though they decided again as expected to just 'eat' more from the innocent as expected by the archons, too many of them voted for better conditions for the innocent. Archons got trapped shortly after, while trying to find the cause for the woken up part of those humans in those secret societies.
Several more big aliens of the chimera hierarchy are expected to be transferred to the Central Sun, too.
If they wait they lose, therefore they are bound to be trapped as well sooner or later - the pressure on the chimera and sub-hierarchies on the surface is raising constantly.

May, 24th 2021 - Please visit the Portal and join the meditation Cobra announced

May, 16th 2021 - Re-evaluations of chimera beings themselves

In conclusion of the re-evaluation of the whole chimera hierarchy, one of those insectoid aliens was given energy directly and they actually do not work for harvesting soul-energy anymore then if they get approximately the same energy directly from the central sun. Though they restart immediately as soon as this giving of free energy is stopped, so they certainly stay sinister predators who work alongside with other member species to eat souls in a heavily deceptive way. Lightforces are still evaluating a possible solution which might lead to a faster liberation but the imbalance caused by their ways to get food is simply too big to give them freely without any judgement taking place.

Please do as Cobra tells on the Portal.

May, 12th 2021 - Re-evaluations through every layer of the chimera hierarchy 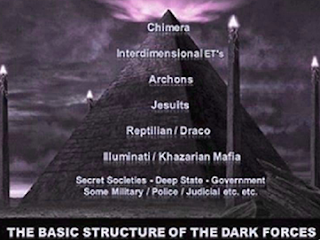 Currently every layer of the hierarchy of the chimera is evaluated for possible innocents among them.

The hierarchy is as Cobra stated (also seen in the picture):

Some lesser involved individuals are given the chance to stay intact as the lifeform they were for actually doing the repairs for the problems they have caused. These are the border-cases which were involved in the hierarchy but maybe not enough to be completely set back in the Central Sun, depending on what responsibility they choose to take.

Popular posts from this blog

In this article there will be several necessarily negative unveilings which will accompany some humans on their ascension path. Many of the following points clearify general problems on the ascension path or lay open cabal-caused problems on Earth, which will help as well. Basically it is a summary of several topics that needed to be laid open on this blog, condensed into one post, just giving an outline of what the cabal do. In the end of this post there will be a short update on the current situation and how the Lightforces advanced in the last few weeks. If there are less updates on this blog it signifies that not much has changed ususally. Lightforces are in the process of cleaning this planet of the parasitic parts of the primary anomaly and nothing fundamental changed about it - also, obviously we are not noticing anything in the physical yet. So, first to the ascension notes: This platonic cycle / great year really ended in approximately 2012, just as the Mayans told via their f
8 comments
Read more

Several big news in this update, followed by general ascension insights again. Despite the great progress, we are still below the threshold for the chimera-induced illusion to fall on the surface of Earth. Therefore there are still no visible changes for the surface population and this will probably continue to be that way until approximately summer 2024 (in case the Event does not happen earlier) - more details later. After cruel attacks on key persons during Christmas, for the first time the Lightforces have achieved a stability on the surface which allows to go into hard offence towards the cabal. That means many high cabal-members can now finally be punished instantly. A punishment that happens in a broad fashion and does not have to happen selectively. This also includes harder, instant punishments in the grids/hell worlds/multidimensional rooms which the cabal created for their victims as well as for their followers. There are still several thousands of these rooms/grid-worlds se
22 comments
Read more

As in each update, the solar system is still cleaned and stabilised steadily from the influence of the chimera. This is still mostly perceivable in the unseen realms for now as physical changes will not be possible at large before compression breakthrough. We have reached a point in the process of removal though in which the chimera in its entirety is shortly before realising their absolute defeat. You can imagine a strict hierarchy in the chimera which disallows anyone lower to know anything higher levels already know. And while the top chimera criminals know defeat is certain since about two years,  the rest of the hierarchy is kept in steady belief of winning against the Lightforces. A belief which will necessarily come to an end soon. That also means the stabilisation process for humanity is coming to an end. While much of the stabilisation has to happen without the chimera witnessing it, in the end, giving insight into the stabilisation is necessary and part of the stabilisation i
5 comments
Read more